St Thomas was a pioneer settlement starting in 1865, located approximately 7 miles southeast of Overton, NV, inside the Lake Mead National Recreation Area. It was flooded over in 1938 with the construction of the Hoover Dam. Because of the decreasing water levels of Lake Mead in recent years, the water that once covered this historic site is gone, and more and more of the original settlement is visible and accessible.

Starting as a pioneer settlement in 1865, St. Thomas grew to be an established town of farms, homes, and stores. It was originally settled by a parry of 45 Mormons led by Thomas Smith. The group was originally sent by Brigham Young to grow cotton and open a supply route to Utah via the Colorado River. In the early days, it was a key supply stop along the Old Mormon Corridor from Utah to San Bernardino, CA.

By the early 20th century, St. Thomas was as big a town as Overton, and much bigger than the ‘then new’ city of Las Vegas.  It was a bustling mining and farming community with as many as 20-30 horse-drawn flatbeds of copper and gold ore coming through town each day.

The pioneers soon learned that this was a difficult place to establish a settlement. They had to contend with the intense heat, malaria infested mosquitoes, and scorpions. After digging miles of irrigation canals, they found the cotton didn’t grow well. Conflicts with local Indians further increased the difficulties faced by the pioneers. After a 1870 Survey established St. Thomas as being part of Nevada (the residents and Brigham Young thought St. Thomas was located in Utah or Arizona), and they were presented with a tax bill from Lincoln County, Brigham Young allowed the settlers to return to Utah in 1871. One resident, Daniel Bonelli, decided to stay.

After 1871, St. Thomas was taken over by other settlers, including outlaws and other people trying to hide out.

Between 1880-1900, several Mormon settlers returned to St. Thomas, as well as other settlers. A variety of crops were planted and cultivated, including cotton. Salt was mined and shipped to St. George and other mining areas. The settlers benefited from of the position of St. Thomas on the main road between Los Angeles and Salt Lake City as a key route to ship crops and goods.

With the discovery of gold and copper in the areas east and south, mining became a booming business, and St. Thomas became a freight stop on the Spur Line of the San Pedro Los Angeles Railroad for ore, goods, and produce.

By 1918, there were 6 established businesses in St. Thomas: Gentry’s Store, R. Hannig Grocery Store, Gentry Hotel, William Sellers Cafe, Howell Garage, and Rox Whitmore Meat. The community was thriving, having established itself as an early ‘tourist attraction’. Motorists driving through found it a welcome place to stop for food, supplies, and if needed, car repairs.

Just a few short years later, the fate of St. Thomas began to look bleak. The price of copper declined, the exports through the railroad decreased, and when the Virgin River Bridge burned,  Highway 91 was rerouted north of Moapa Valley across Mormon Mesa. More ominous of course, was that surveying and test drilling for a new dam began in Boulder and Black Rock Canyon.

By 1926, plans for building the Hoover Dam had already been in place, and government appraisals for the holdings in St. Thomas began. Residents fought the government and were not happy with the low payments for their properties.  Many of them never really believed the waters would rise so high after the dam was built. By the summer of 1932, all holdings in the settlement were the property of the U.S. Government, and by 1938, the entire town was covered by the newly created Lake Mead.

Before the town was fully submerged, some homes were moved, and other structures were taken apart and pieces salvaged  to build in other communities. The St. Thomas Cemetery was moved in in 1935, the graves and remains located to the present day St. Thomas Cemetery.

Many of the residents of St. Thomas moved to what is now the Moapa Valley, including the towns of Overton and Logandale.

The remains of St. Thomas are visible again since the waters of Lake Mead began receding in 2003. The National Park Service has cleared a path from the parking area down to the site. It is about a 3/4 mile walk to the remains. There are a few steep slopes and much weed and bushes to negotiate, please use caution!

The entire area of St. Thomas is  under the jurisdiction of the National Park Service, and you must obey all NPS rules and regulations. Metal Detectors are not allowed, and you may not remove any objects from the area. Please leave all remains exactly the way you see them, as work is still continuing on identifying items and locations. The are can be hazardous due to overgrowth and objects projecting from the ground. Step cautiously and do NOT climb on any remains.

While we cannot bring St. Thomas back to life, we can show the town and its people the respect we’d like our home town to receive. Please do not climb on foundations or disturb any artifacts you find. These remnants remind us of the people of St. Thomas, those who played, worked and lived here.

In February 2012, three companies of Moapa Valley “pioneers” dragged, pushed and hauled 30 loaded handcarts from Logandale on a trek down the Muddy River to St. Thomas in a brief but accurate depiction of the struggles of the earliest Mormons crossing the Great Plains. 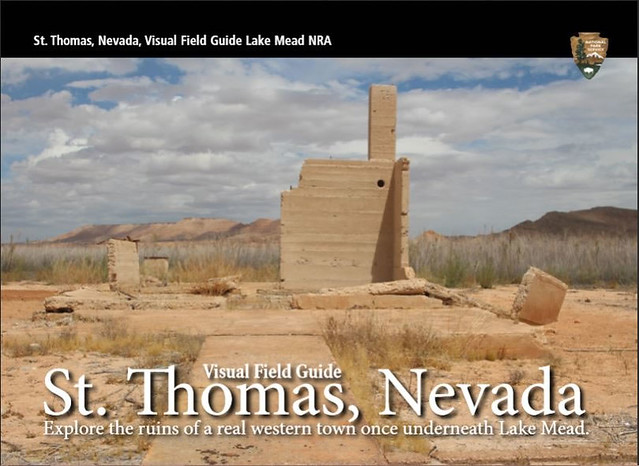 Read the full story in the Moapa Valley Progress.

Visit the websites below for more information about St. Thomas

Keep Up.
Visit Travel Nevada
Scroll back to top